At about 6:30 am, starting the day for me, accompanied by a coffee and encouragement. The initial intention was to find corvinas at dawn, because whereas the swell was only 1.5 m, the water would be clear and usually it is possible to catch them in the minutes when it starts to clear up.

I started looking at each stream in front of the rocks, and looking for a rock to cast comfortably. As usual at dawn and cloudy sky, I chose a BEACH WALKER 120 MD “Pink Sardine” color.

When corvinas are, do not hesitate to give a touch or first attack. I tried and could not get the corvinas bite the lure. I kept walking, always looking for a rock to stand, to explore. As the hours passed, the clear water was beginning to change color. The tide began to move the background and give me the first areas to go into the sea between the rocks. A good “fall” kept me awake and alert to slippery rocks haha.

On a rock, I throw the 120MD, between two reefs. A couple jerks to give it some depth and begin to pick up steadily. Without ever losing sight of the lure from the bottom, with its own subtlety of a Flounder, approaches the lure and with a light touch, Bite.

With the excitement of the first capture bordering approximately 5 Lb, I kept looking from rock to rock. This time, I minded to find some other Flounder. Constantly seeking between each stream could read. I really tried to explore every corner, presenting the best lure I had for each scenario. A small Flounder, bit the bait and return to the sea. 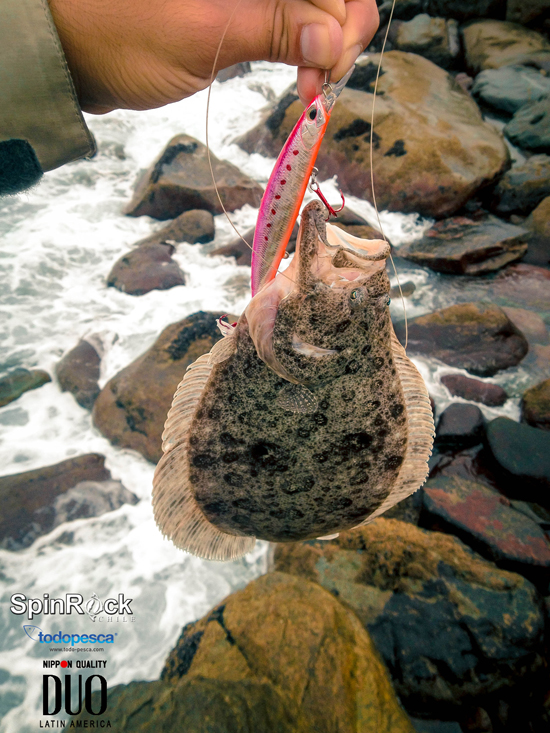 In the experiences I’ve had with big flounders, I have always fish in areas with very little water. I’ve always thought that perhaps in those places, they can retreat of sea lions and position where their prey. If you look at it from the perspective of a small fish, this will take shelter from predators in areas of low water, where they can not enter.

So I threw the Beach Walker 120 MD “Pink Sardine”. I close the Pick-up, two jerks and start reeling steadily. Sometimes, touched the rocks below. When this happens, it is best to adjust the angle of the rod. In this case, going up slightly for the lure to rise and, as we approached the shore, we will progressively down the rod, so that the lure keeps its height all the way.

I did about three shots, when I feel a sharp blow to the line. I force a bit and begins to flee. In front of me, there was a rock out of the water and a side stream, which could make me cut the line. So I tried to force him to move to my right, which was more clear.? Trying to circumvent the rocks on the shore, I approached up to me and I took it with my fishing grip. 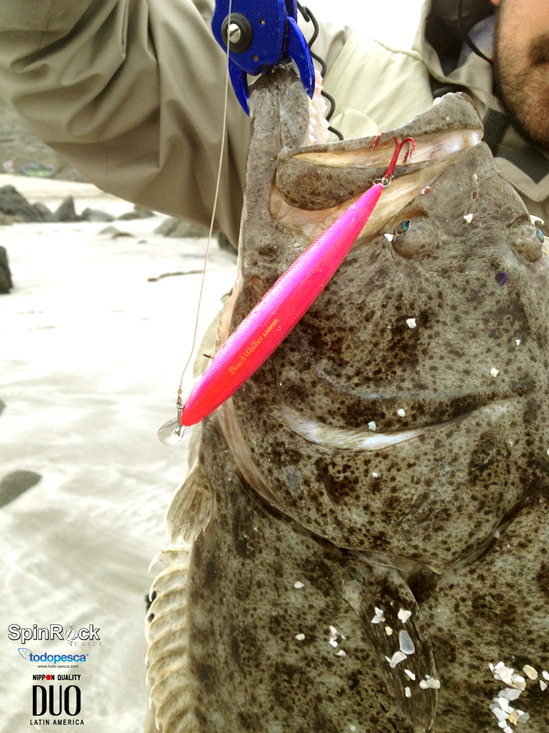 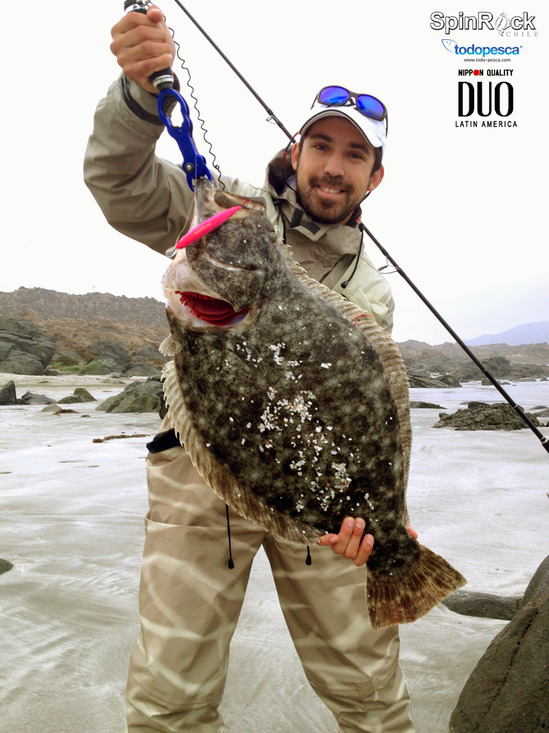 Thanks to the kindness of some touristsI managed photograph the moment before returning to the sea this beautiful specimen. The third time’s the charm.