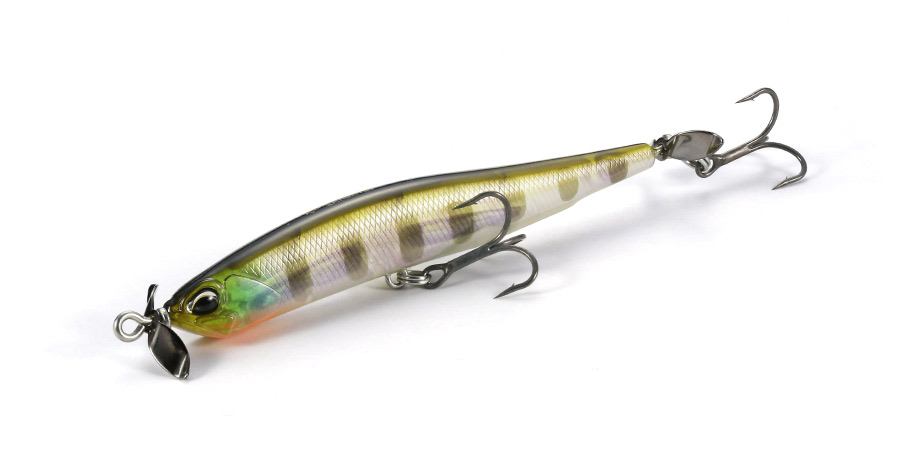 The vehicle for spybaiting technique

The cupped propeller configuration displaces soft but turbid water along the lure’s body-line releasing what is called “plum-effect”. Plum-effect is actually detected by the bass frontal nerve network is striated through the fore-region of the bass helping the bass feel pressure and vibration. This sensory matrix integrates with the bass instinctive predatory and territory responses.

Uniquely shaped body halves and angled ballast induce a shimmer motion and subtle body rotation called “Passive minnow vibration”. This occurs when the lure is paused or allowed to free-fall to another depth.

The tracking of the lure is significantly straight and purposeful. However, slow motion video also shows the lure exhibiting a “listing action” which is called “body-flash”.  This flashing or reflecting during the retrieve has the tempo of a casual unassuming feeding minnow. The objective to display a non-stressed, highly regulated minnow, the precursor to neutral mode activity.

The 80mm slim body has been loaded with a total body weight of 9.4g. This heavy weight setting has provided it a casting ability unimaginable from its body size.

With the fast sinking rate, you will be able to trace a deeper range than your ordinary propeller-baits which tend to surface easier.

The micro pulsation created from the smooth rotation of the props, the natural rolling of the body from its straight action and its lush flashing will mesmerize most basses in the field.